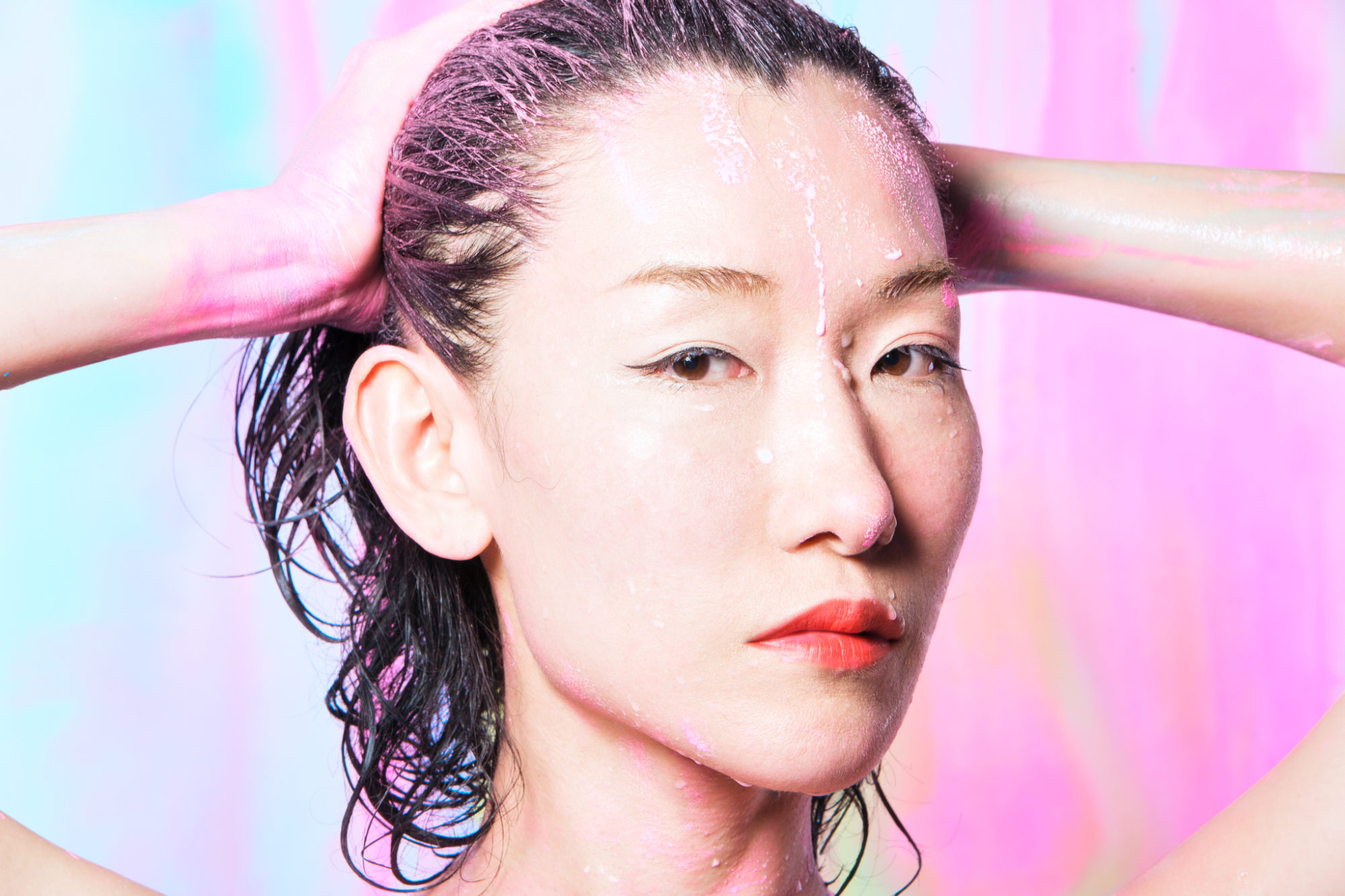 I let my body move with the energy of that moment
I let my body dance and paint
And I express the primitive joy of human being
Transcending nationalities, races, sexes, and ages of those who I encounter
I share the joy and paint the light of joy

SAORI KANDA was Born in Yamaguchi Prefecture (Japan)
She grew up in Baghdad(Iraq) and in Dubai (UAE) in her childhood.
This experience gave her a great opportunity to see the beauty of the world as well as a strong sense of longing for Japan.
She keeps traveling around the globe, visiting new places, meeting new people, and those are the energy for expressing her passion.

” LIFE PAINT ” is her form of ART.
She uses her entire body to feel the waves of music and draw her unique piece of art on a large canvas as if she dances.
She breathes a life into the canvas. Her work grows and become filled with freewheeling spirits by experiencing the cycle of destruction and rebirth.
She, as a painter, becomes a part of her own work and her outstanding performance attracts offers from all over the world.

Saori Kanda was born in Tokuyama, Yamaguchi Pref., Japan, and spent her childhood in Baghdad and Dubai, now works as a contemporary artist based in Tokyo.  Kanda has continued to express the emotions hidden in the primitive human hierarchy in the form of performance and painting through an approach that combines dance and painting, and uses the term “Odori Eshi” to describe her existence.  Her artistic performances, which involve dance, music, costumes, lighting, and film production, and which are performed in front of the audience, at first glance appear to be of the kind that can be perceived as theatrical and artistic media.

But what lies in the background, she says, is an inclination to incorporate into the painting itself the body of the painter, passion aroused by music and dance, and activeness, which can be said to be one of the approaches to the art history of action painting developed by Kazuo Shiraga (1924 -2008) and Jackson Pollock (1912 -1956), which focuses on the expression of activeness and unconscious images in painting.  ”For me, the act of “Inori” is the very act of “dance” and I feel that it is an important entrance (ritual) to express unconsciously the connection to the universe, away from my existence and intention.” As she says, she does not play a role of arbitrariness in the production of paintings, but maintains her position as a mediator who embodies the things hidden at the universal level.
Although she approaches the traditional trend in the history of abstract paintings, the reason why Kanda does not lose her own originality is that she introduces dance and music.

In the world of action painting, which consists of canvases, paints, paintbrushes and artists’ own bodies, Kanda brings new angles of dance and music. Not only that, but also that, as a ritual in which all people, including participants, share a mystical experience about their art performance, she embraces her own activities from the very beginning of technology, such as VR and AR, with the intention of visualizing and sharing the special existence beyond the five senses that she feels when she gets on stage.
In our daily life, where remote means of communication such as portable devices have developed remarkably, music and dance can be said to be the commonplace everyday being able to access the contents anywhere, but Kanda mixes and updates these media-artistic elements with action painting, which is a traditional movement and a method of painting creation, and creates a new expression. This attitude can be said to be an act to present one of the missions and methods of modern art, that is to say, to make action painting, which is a movement that is “It’s over.”, breathe new life by modern methods and means, that is to say, to continue things that are not moving to lie in the history of art in the present and beyond.

Saori Kanda calls her own creative work ‘LIFE PAINT’.
To draw life. To draw throughout her life. Or to draw staking her life.
You may take her words however you can.

To draw.
For her, it is not just to create artworks but it is to record her
encounters and her growth.
What you see in her work always is a festival of lines and colors that
breathes heavily holding enthusiasm within.
It is like a flower, like a body, or like a landscape of an unknown country.

Who is Saori Kanda that creates this?

Having spent her childhood in Baghdad and Dubai,
she says she always had a longing for Japan, a far country from where she was.
Certainly, in her work, it seems that influences from Arabic world and
elements of Japanese roots are inseparably interwoven in her depiction
of human body , detailed patterns, and the curves of her flowing
brushstrokes .

She does live with unbridled enthusiasm.
She draws, longs for encounters with people and places, travels,
talks, listens, gets worried, breaks, laughs, creates, sheds tears,
lives, communicates, and again, draws.
With all her strength and all her heart.

It does not matter if it is a live painting performance , a creation
of tableau, or a collaboration with other fields such as music,
fashion, and so on. She does what she does.
She jumps into the encounter throughout her body, communes with it,
and devotes herself to it. Then, she lets her brushes run.

The ‘heat’ that is boiling in all Saori Kanda’s work is the ‘heat’
liberated in a chemical reaction of the encounters with people,
things, and places throughout her life.

LIFE PAINT. To live out her life is to draw.